In 2007 I published a lengthy essay in a literary + art magazine called “Coordinates,” compiled by my good friend Jon Allen. My contribution was a series of vignettes tracing my footsteps through various travels (mostly in Kansas) and ideas I’d picked up along the way. Unfortunately I worked on the thing for way too long, resulting in something that even at the time felt a bit overwrought. After looking at it again for the first time in several years I decided to go back and distill each section into roughly a sentence or two. I call it “Coordinates Revisited.” 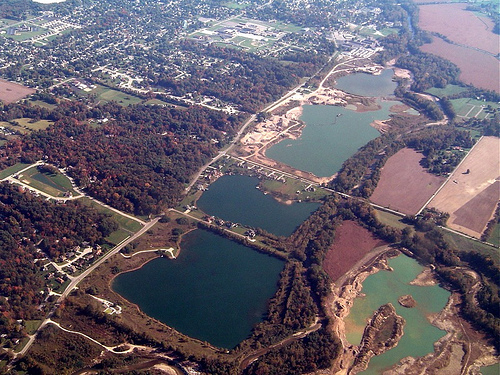 When home becomes a relative term, and each item tucked into your backpack becomes a talisman

Spend too much time thinking about where you should be living, and you’ll forget to live

Traveling vs. Wandering. “The great affair is to move” — Robert Louis Stevenson

The remaining spire of an old power plant on K-10 highway in Lawrence, a strikingly similar silhouette to Drachenfels, the crumbling castle overlooking a bend in the river Rhine.

Unexpectedly emotional, the night I met her in the smoky basement of a German cellar-bar. I grew up with Pin-Bot but I never knew about his Bride. Seeing her the first time was like an unexpected introduction to my robotic mother. I had a vague idea that she existed, but I never knew she was so beautiful.

Driving through the Eastern Kansas countryside at night to the decommissioned Atlas-E missile silo. Pulling up to find it guarded by the dark shape of a bull, faintly glowing waves emanating from its hide, like the golden cattle of Helios gone radioactively wrong.

Sharpening your pen on the dull pavement of your hometown

Clinton Lake, full of secret campsites I never got to visit

Inside the Heron House at the Wakarusa Wetlands. The wood shutters of the hexagonal structure make a perfect reducing valve for the vast Kansas fields and sky.

Watching the row of 100-year-old houses get torn down on Tennessee street.

Driving past the piles of stone that used to be Stull Church.

Visiting the empty space where my grandparents’ house stood for 50 years and watching the sun set from a viewpoint previously obstructed by barns and work sheds.

Where do ghosts go when their homes are destroyed?

In a small Weimar cemetery, the statue of a young girl waits on the sleek black tombstone of her loved ones while evergreens grow all around them.

Back in the Hippie days, they used to refer to Lawrence “Baghdad on the Kaw.”

In the Vondelpark that summer, the faces of people I knew would appear to me and linger, as if waiting for me to return. As I soon as I made a motion to do so, they disappeared again.

I miss writing and receiving letters. E-mail travels too fast for its own good.

The seductive seven tones of the Nintendo warp-whistle. A dust devil that carries you away to secret levels and islands full of strange plants and pixellated monsters.

In the 24-hour dream diner, sharing a milkshake with someone you haven’t even thought of in years.

When the apocalypse comes to Kansas, I’ll be waiting for it at the feet of the ancient Greek-looking statue at Burcham Park, just beside the river.

Summertime, twentysomething, lost in the Kansas Urwald, bicycling toward the visions that are just around the bend.