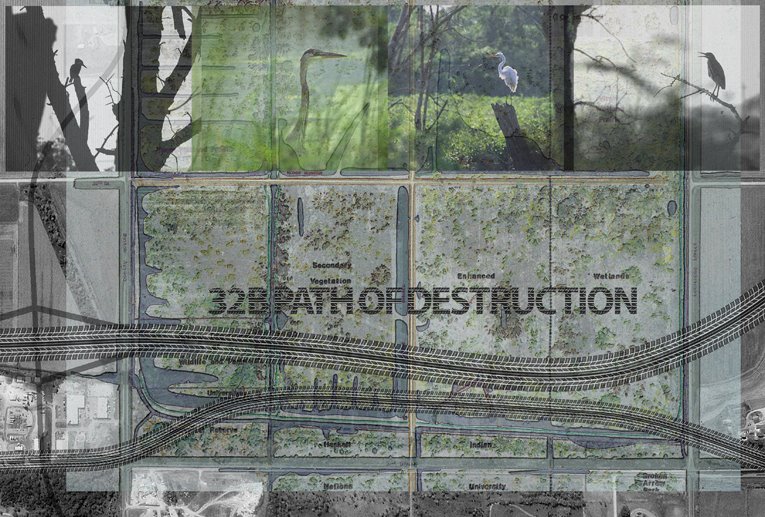 The title of this post is taken from a punk song written by my friend Jacob back in 2001. Though he meant it sarcastically (you might even say “sarcaustically”), the message has been party line for folks who have been trying for decades to build the South Lawrence Trafficway.

I was just reading today how the State of Kansas elected to to commit  $550 million to “fix” major traffic bottlenecks, including the aforemenioned route in Douglas County. As the above graphic illustrates, the South Lawrence Trafficway will cut right through the Haskell-Baker Wetlands, an extensive nature conservation area and ancestral burial ground of many of the region’s displaced Native Americans in the early 20th century. Even though the KC Star article eventually addressed the controversy, the headline in the second page read: “News elates Lawrence.”

Seriously? Lawrence is elated that the state is finally giving them the green light to bulldoze through the Wetlands? I guess it all depends on who you talk to.

Personally, I’m thrilled that Governor Sam Brownback was able to trim $689,000 from the budget by abolishing the Kansas Arts Commission right after he took office. I thought it was ridiculous how we supported artists, projects and festivals — many of which were in rural Kansas. I didn’t find it at all disturbing.

Ok, so I’m being sarcaustic again. And I have to acknowledge that part of job creation, maintaining the infrastructure, reducing debt, etc. involves making difficult choices. But it’s frustrating to watch us invest in half a billion dollar traffic projects instead of public transit. And it’s hard to watch my own state kill off its cultural assets for the sake of money.

But today, the victory belongs to the Mid-America Regional Council and the future of automobile transportation in the great state of Kansas. Hoorah! Without the impractical distractions of art and nature, the people of Kansas are elated.

But for how long?